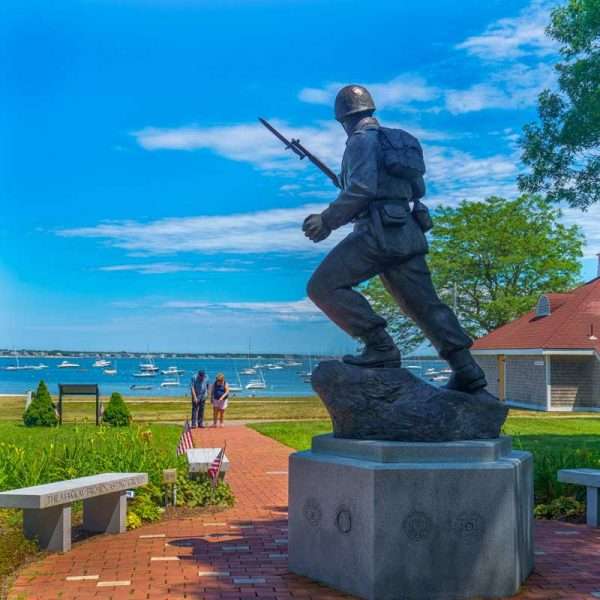 Beachgoers enjoy this spot for the swimming as well as playground and public grills for cookouts shaded by a pine grove. This is also a good place to watch the boats traveling in and out of Hyannis Harbor. Memorials:The John F. Kennedy Memorial is located on Ocean Street in Hyannis, Massachusetts. It overlooks Lewis Bay, where President Kennedy often sailed throughout his life while in Hyannis Port, Massachusetts. It consists of a large stone wall with two bronze medallions, one of President Kennedy’s bust profile on the front facing the bay and the other of the Great Seal of the United States[1] on the back, a reflecting pool and fountain, a large concrete terrace, and landscaping. The fountain is lit from the bottom of the reflecting pool, invoking the John F. Kennedy Eternal Flame at Arlington National Cemetery.[2] Inscribed around the reflecting pool is a quote from President Kennedy’s Radio and Television Report to the American People on the State of the National Economy on August 13, 1962: “I believe it is important that this country sail and not lie still in the harbor.”

The Cotuit Library was founded in 1874 by the Cotu

Happy Tuesday! Are you stuck and don't know what t

Let's paddle on over to the next of the 7 villages